Kiwis love their playgrounds. You can’t go far through any city or town – or past any school - in this country before you sight the familiar mix of swings, slides, climbing frames and other equipment to keep children happy, active and occupied.

Many years ago, playgrounds were usually built with either concrete, asphalt or even bare earth as the ground surface.

In today’s world, such a base doesn’t pass the health and safety test. You usually find ground cover that is more cushioning. The cushioning is all about protecting children from head injuries. The playground’s surface acts as a crash helmet.

Enter Matta Products. This home-grown kiwi company manufactures and markets Play Matta™, a playground safety surfacing system made up of a PVC tile and a rubber underlay. Matta also has an industrial range of PVC mats branded as Work Matta™, designed for workers who stand on hard floors in front of machinery for extended periods with the goal of reducing fatigue, including leg and back strain. This product is sold into large manufacturing facilities in the United States, Canada and the United Kingdom.

In the playground space, Matta competes with artificial-grass, rubber tiles and poured-rubber products.

The point of difference with Matta is illustrated by Rocket Park in Mount Albert, Auckland. The Play Matta™ surfacing installed here is approaching 20-years-old and still meeting safety standards, but is scheduled to be refurbished shortly by replacing approximately half of the top-layered PVC tiles and 5% of the underlying rubber “shock pads”.

Matta Managing Director Paul Harris says the PVC matting being removed from the playground will be uplifted, cleaned, granulated and re-processed into new matting ready to be laid for the next generation of tiny, trampling feet - an excellent example of the circular economy in action. The renewed mats will be redirected back into playgrounds for further use.

Paul has fond memories of taking his own children to Rocket Park when they were young and now enjoys taking his grandchildren to the same park with the same surfacing.

Another feature of Play Matta™ mats is that they can also be laid directly on top of other older surfaces that are failing. The obvious significant savings are the cost of tearing up the old, often non-recyclable material with the benefit of greatly improving the durability and shock absorbing capability of the playground surface. One of Matta’s major markets in the US is doing this: Matta™ is saving failed, poured-rubber surfacing from the landfills, by patching and recovering with Play Matta™ tiles - a product known as Play Matta™ Recover.

The other major point of difference for the company is Matta’s ecolabel – Environmental Choice New Zealand.  Matta is the only provider of playground and industrial matting in New Zealand to carry the ECNZ tick, signifying environmental preferability in the product area.

Talk with Paul for long and the word recycling comes up often.  “It’s part of our fabric,” he says.  He started out in the recycling business many years ago, with his interest in sustainability first fostered more than 40 years ago by his high school biology teacher. This interest was rekindled when Paul met the original founder of Matta, Murray Scott, whose own interest in recycling goes back to the 1970s when he was Mayor of Otaki.

Murray saw plastic rubbish stock-piling, and people unemployed - and wanted to address both issues together, says Paul. “He did this by researching and finding product that could be made from recycled material and proceeded to literally build the equipment to do it. He was one of the founding fathers of recycling in New Zealand.”

Paul’s adamant that before beginning to think about recycling you have to have a unique, high-end product, “and markets that want this product. You then look to how it can be made out of recycled material. No market means no business.

“If you can further recycle your already recycled product at the end of its lifetime, why wouldn’t you? It does take more effort, but if we can recycle, we will. Rocket Park is an example of that.”

Matta produces their Play Matta™ system from a combination of recycled materials, including rubber gumboots, some medical-packaging waste, waste from metal recyclers (electrical cable PVC casings), waste from spoilage, and product defects from other manufacturers. 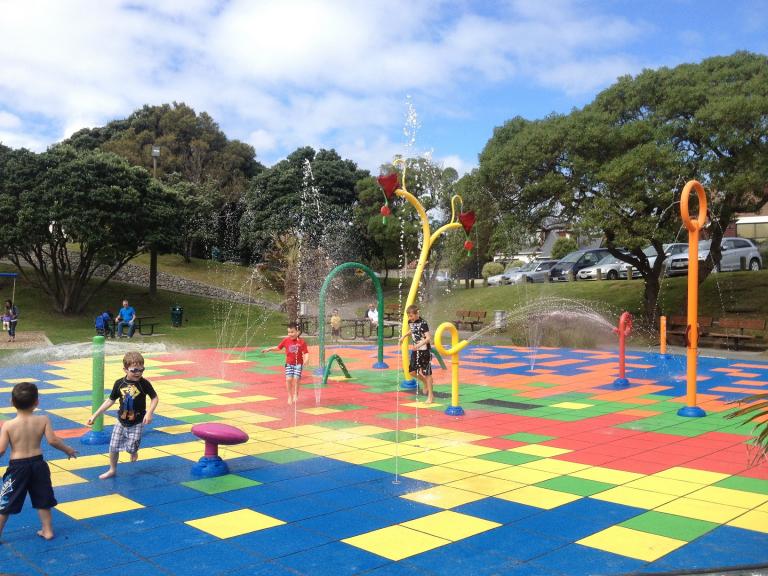 Manufacturing is done out of Matta’s factory in Otaki, and Paul says the manufacturing operation has survived over the decades because of its vertically integrated operation. “We are recyclers – we sort, clean and prepare a range of recycled materials. Then we make a product that the market is calling for. We are also a logistics operation – getting our product to our warehouses in the UK, US, Australia and NZ.

“We then have to sell it, so we have our own salespeople in all of these markets selling direct to the final user. We then take responsibility for installing the product at our customers’ sites using our own trained, certified contract installers. Our operation from sourcing raw materials to the final installation is ISO 9001 quality accredited. We take ownership over the entire operation.”

Matta also exports into China, Canada and the Pacific Islands through agencies.

Paul says the company has a significant focus on its overseas markets; currently around 80-85% of the product goes overseas – “we’re proud to say we are turning rubbish into export dollars.”

Matta has had major success in cracking the US schools market, he says.  “We are the major supplier for one of the largest unified school district in the US and are currently installing in a number of the other top-14 largest school districts.”

Matta also has its sights on expanding into Europe, and the German market in particular, says Paul. “We can do this from our strong foothold in the UK; it does pose some significant challenges in a recycling sense, but we look forward to tackling those.”

Paul says Matta has had its Environmental Choice New Zealand ecolabel for more than 10 years. “We got into it because we wanted to prove to the market that our claims in recycling are genuine.”

Matta has two ECNZ licences: one (EC18-17) for recycled rubber products that covers a range of considerations around the processing of reclaimed rubber, including energy and waste management; and a second for recycled plastic products (EC06-19).

New Zealand Ecolabelling Trust General Manager Francesca Lipscombe says the specifications for recycled rubber and plastic products were developed for a range of environmental reasons.  “Our specifications encourage the reduction of rubber and plastic entering the waste stream and the conservation of rubber as a valuable resource. But they also aim to reduce the use, and subsequent release, of environmentally harmful substances into the environment at all stages of the product life-cycle.

“Additionally, the spec’s encourage reduced energy use, and promote the recovery, reuse, recycling and responsible disposal of waste materials and packaging arising from the manufacturing and distribution process.”

The recycled plastic products specification is currently being revised to focus more on durable and reusable plastics – very much in keeping with Matta’s ethos, says Francesca.

Paul says having the label helps in gaining the other credentials. “We like ECNZ. It’s actually tougher than ISO – it keeps us edgy.”

Having both credentials makes sense he adds: “ISO covers the factory and our environmental processes, and ECNZ is about the product. Because we have these credentials we can go to offshore markets and show we are more than just ISO-compliant.” 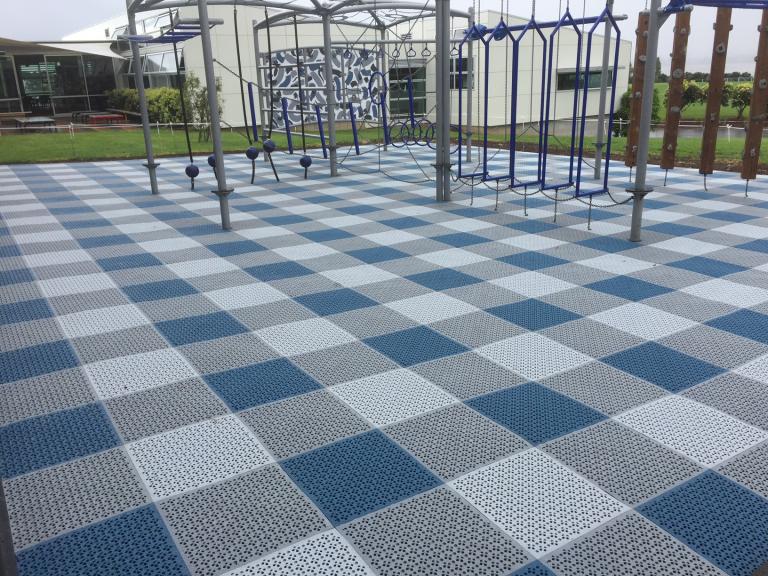 Paul says compliance with environmental regulations in places like the US and Europe calls for good processes to test for contamination - a challenge for the company. “To stay on top of this, we’ve invested in equipment and systems that test for unacceptable contaminants in the recycled sourced material that we receive.”

While it is tempting to make purchasing choices based on trends and fashion, Paul believes choosing a product like Play Matta™ is an investment “for today and the future. A Play Matta™ playground is a great-looking, sustainable, safety-compliant and feel-good purchase.

“We feel some Councils in New Zealand could do more to support products like ours. They have written environmental policies but these policies are not always put into practice in their procurement procedures. An inferior and cheaper imported product that will soon end up in the landfill is sometimes preferred over a quality, New Zealand-manufactured recycled product, that in turn can be recycled again. To support our claim of longevity we believe we have the best warranty of any product in the playground surfacing market.”

Paul says Matta’s plans for the future continue to be very much aligned to what the market wants: environmentally acceptable products and processes.  The company is currently replacing or upgrading all its production machinery and has a number of new products on the planning boards.

“But we have made a conscious decision to stay in recycling where we can, with an aim to ensuring all the products we make can be recycled in their turn.” 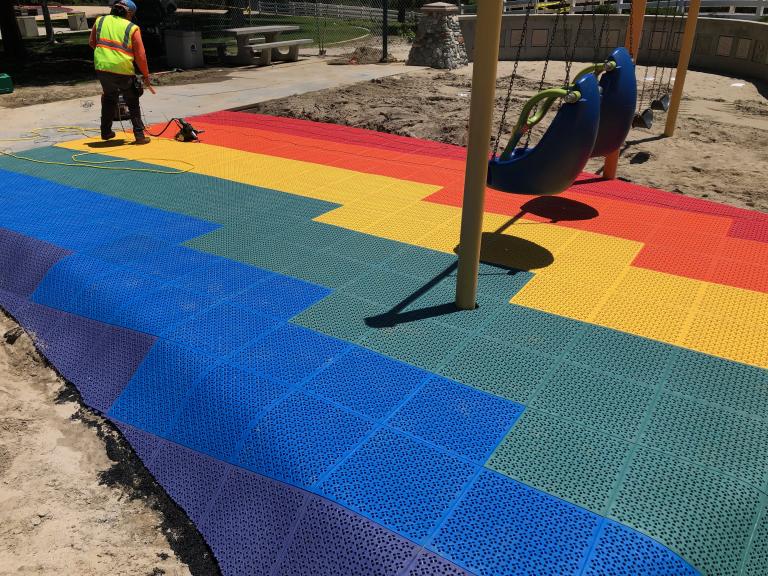 Matta Products Ltd is a New Zealand company that designs, manufactures and markets to the world the Play Matta range of playground safety surfacing. Play Matta represents the new generation of high performing safety surfacing designed to enhance the creative and inviting playgrounds of today.

Departing from all existing playground surfacing solutions, Matta Products pioneered a new manufacturing process and began producing the Play Matta range in 1992 at its plant on Otaki. With strong roots in recycling Matta Products has perfected the technique of turning waste rubber and PVC into a two-layered playground surfacing system consisting of impact absorbing rubber shock pads overlaid by durable and attractive PVC modular tiles.

Matta Products is ISO 9001 accredited and has a comprehensive quality control program covering all aspects of it operations, from raw materials sourcing, through manufacturing, to final installation. This rigorous quality assurance enables a playground surface to be certified as having met all applicable safety standards immediately after completion.

Matta Products has succeeded in its mission to answer the markets need for functionality as well as aesthetics; unsurpassed durability and ease of maintenance; full compliance with all playground surfacing safety codes; and environmental responsibility.